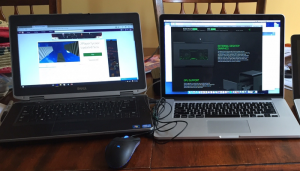 Consumer laptop technology is the fine art of balancing the needs of a market with the trends they perceive as desirable. Companies put a massive amount of money into researching those trends in the hopes of finding the Holy Grail feature that will get a consumer to buy their laptop.

I’m a consumer who prefers laptops with more CPU and GPU power along with the longest amount of battery life. Yet, while companies have made great strides in creating laptops that have computing power, battery life is still a major limiting factor. That’s where the balancing happens. Want more power? Then the GPU and CPU will be mobile chips. As those mobile chips push the laws of physics with their computing power to energy sipping ratios, they’re great for basic functions and apps but not for professional level programs and intensive video games.

And I applaud Razer’s upcoming Razer Blade ultra laptop that will offer the Razer Core accessory that delivers that option when gamers return home through the power of Thunderbolt. Yet, it can’t deliver everything while on the road.

The newer MacBooks seem to show that Apple is listening to consumers. Apple shrank the logic board in its laptops and filled the remaining space with custom batteries that will let it run for up to 9 hours. While I haven’t tested one yet, that’s impressive. It shows a clear engineering decision to deliver more energy in a smaller package.

Yet, why not have a different option? While laptops get thinner and thinner, why not give people an option to order an ultrathin laptop with a 24 or 48-hour battery? Same specs but no longer ultrathin, a thin laptop that would give those who go on long flights without power cords or those who roam to places without power a different option. Or having such a modular design would allow those who want an ultrathin most of the time the option to swap out the battery base with a longer lasting one when needed.

Power users would likely pay a premium for such an option but for the throngs of people fighting over the only power socket in an airport terminal, why not give power users thin laptops with massive amounts of battery life and the CPU speed they need?