AOL’s video game-focused news, review and information site, GameDaily.com was where I produced nearly 300 galleries from Best Video Game Babes to a Father’s Day feature where I asked gaming celebrity dads what games they chose to play with their kids. The Sims creator, Will Wright even sent me a rare picture of he and his daughter. The year after, all our competitors copied the idea.

Moving back into straight news and reviews, I quickly became managing editor for the site. From copyediting every piece before it went live, obtaining legal images for GameDaily’s use to managing a massive (and 100% free) PC demo downloading service that eventually became BigDownload.com, I grew the audience and manged a budget that was previously out of control. Along the way I was also able to write several hardware peripheral reviews and even journeyed to London, England to experience the final weeks of filming of Harry Potter and the Half-Blood Prince. 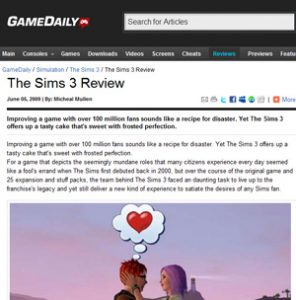